In RoboRoyale, we aim for a minimally invasive approach to affect large ecosystems in a positive way: We aim to regulate (and also enhance) the egg-laying activity of a honeybee queen by replacing her courtyard by a set of robots that feed and nurse her. By providing an increased flow of proteinaceous food to the queen and guiding her to regions that are ready for cell deposition we plan to enhance her egg laying rate, ultimately yielding stronger colonies and higher pollination activity. As we provide the high protein inflow exclusively to the queen and not to the rest of the colony (without robots these two flows are practically inseparable in nature) we induce a stronger brood production which will then require more protein, resulting in the workers having to engage in more pollen collecting (thus pollinating) flights. (1) This will positively affect plant growth, vegetation spreading, fruit and seed production. (2) This will in turn support animals as food. (3) Ultimately enhanced pollination can also lower the competition that honeybees have for nectar with other wild (and currently endangered) insects species, as increased pollen foraging will lead to decreased nectar foraging in return. In our proposed RoboRoyale system, we will provide the user/experimenter a novel method with which he/she can vary these two foraging activities of honeybees in a controlled manner. Thus, we aim at a 3-fold positive ecosystem effect. Such treatment cannot be established with conventional beekeeping methods (pollen traps) as it always cuts the whole colony (workers, brood and the queen) from the protein flow altogether. Our special idea is that we can affect a whole ecosystem, potentially millions of plants and, in consequence, hundreds of millions of animals and other organisms, by simply affecting one single living organism in a natural and non-invasive way with robots. This has never been done before, and it seems to us to be the most effective method to support the productivity of ecosystems with a minimum run-time effort and with an expected maximum of ultimate effect. To achieve this, we will have to produce miniature robots that are coordinated so well in a natural habitat, a vertical comb of a living bee colony, and that are embodying all relevant honeybee behaviors so well that a very hard referee (the living honeybee queen) accepts them as conspecific worker bees. 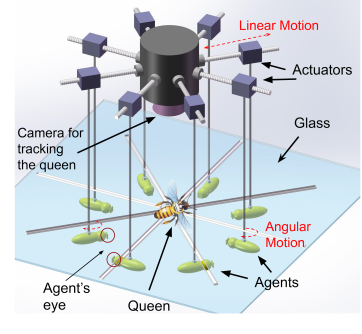 Vision of the proposed RoboRoyale system.

This Website is maintained by the Department of Computer Engineering, METU